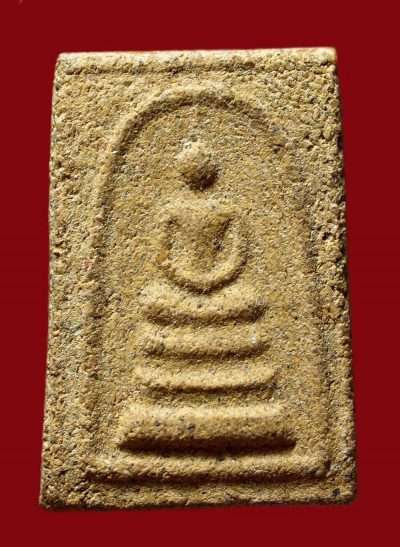 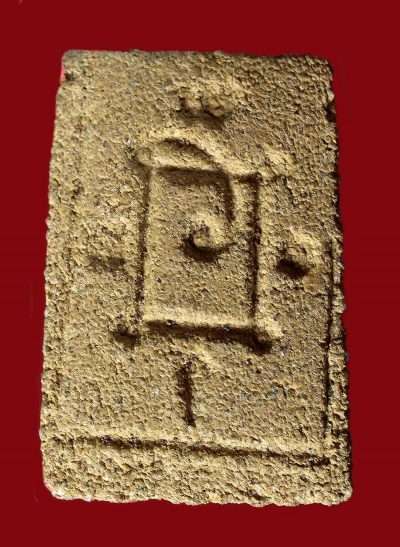 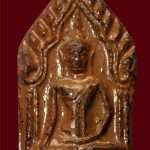 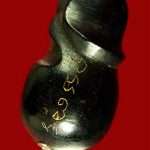 First generation Luang Phor Daeng yellow somdej, Pim Kanaen. These smaller format pims are actually rarer than the larger amulets and it is not often that you will find one in such wonderful condition 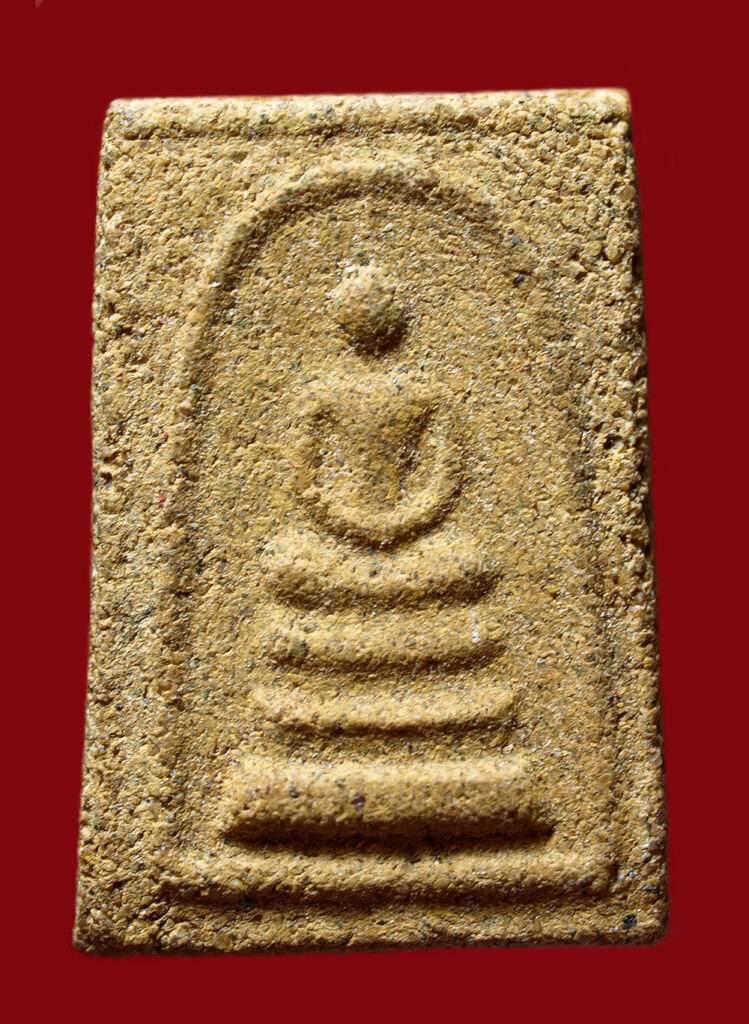 Prapong Yanvilas amulets are without question the most famous series of amulets created by this great monk. In fact the sanctification of these pims took almost three years to complete.

Amulets consecrated by Luang Phor Daeng are known to have help save many lives from road accidents. It is reported that no victims of road deaths have ever been found to have been wearing LP Daeng’s amulets.

Another well reported event was the incident of a parachutist who jumped from a plane, but his chutes failed to deploy. Inexplicably the strong prevailing wind blew him into safely  into a swamp and survived. he wearing the LP Daeng Somdej amulet.

Petchburi province in Thailand was known to be violent, with many conflicts settled with guns. It was said the LP Daeng Somdej amulet acted as an invisible force or bullet proof jacket with bullets being unable to penetrate human flesh.

Miraculous incidents were widely reported and prices rose rapidly. One of the most accurate accounts of these pims was written in the Apiniharn Magazine published in February BE 2517, the very month after the death of Luang Phor Daeng who passed away on the 16th January BE 2517. 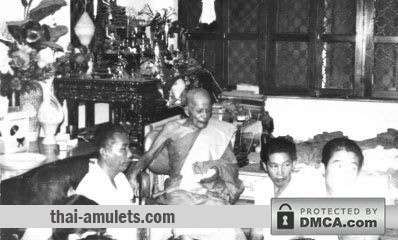 3. Production of the pims commenced in BE 2509 and completed in BE 2511. This is one of the reasons that you will see some magazines list these amulets as BE 2509 or BE 2511 as it is known a number of pims were distributed in both these years to committee members of the temple.
4. The amulets were sanctified at more than 250 sacred ceremonies held at a  similar number of temples.
5. Luang Phor Daneg continued to bless these amulets for a further 2 years during the period BE 2511 to BE 2513.
6. Although the amulets are commonly refrerred to as BE 2513, they were not actually released to the public until October BE 2514, and as such it would be quite accurate to describe them as first batch BE 2514.  The following document held at Wat Khao Bandai-it is a letter from the Abbot of Wat Prachanamit, Korat requestiung help. Funds were required to build a crematorium and confirtms that the amulets would be released to the public on the 23rd and 24th October. The hand written note by LP Boonsong confirms that amulets were dispatched. 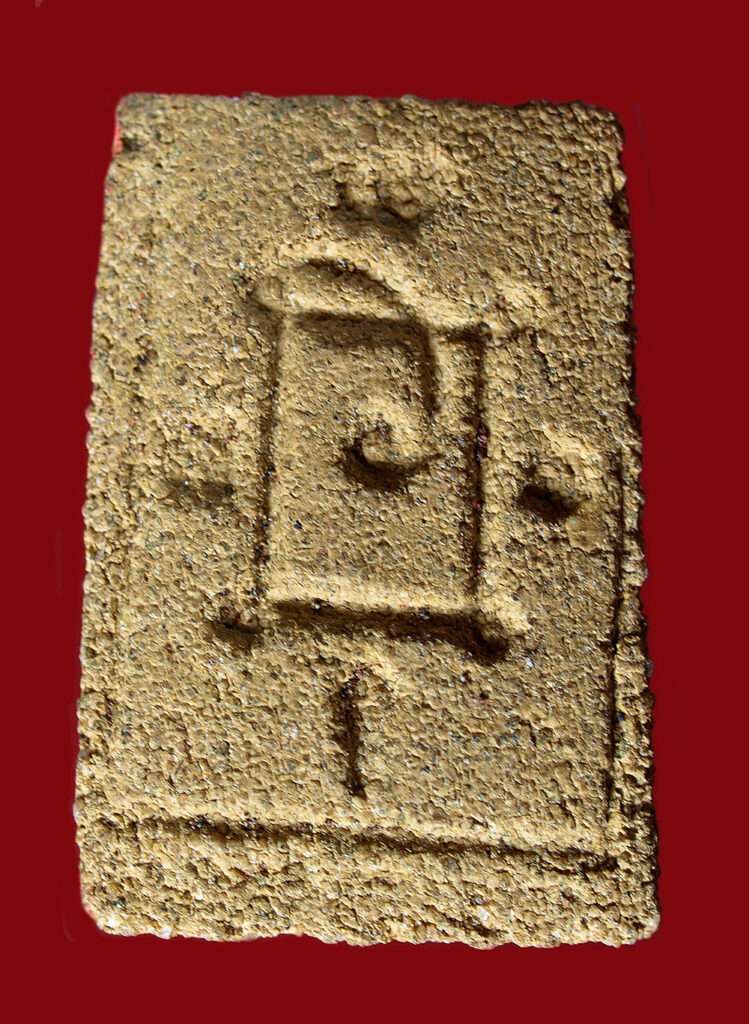 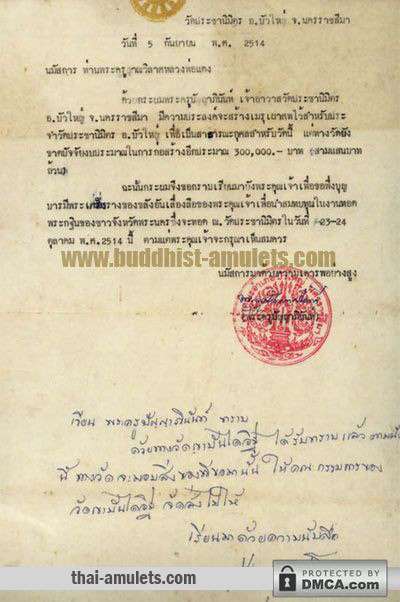 Apart from the 250 ceremonies, and the ceremony organized by LP Daeng etc these amulets were also specially blessed by the following sacred monks:

-Jaokhun Nor of Wat Thepsirin, who transferred sacred power into the amulets on April 25th, B.E.2513 and December 5th, B.E.2513

The  Karmakarn version amulets or Pim Teun were created in order to give to the temple committee.

Committee batch amulets are generally made from  a finer mix than the standard pims which generally have quite a distinctive/rough appearance.

In B.E.2514 the amulets were introduced to the Thai public and Luang Phor Daeng sprinkled Pong Tabai Tong powder onto the amulet surface, and in doing so the amulets gained a new addition to their name.

Pong Tabai Tong powder is actually gold powder collected from Wat Suthat, a famous Thai temple in Bangkok. Interestingly a number of pims were retained at the temple where they would be blessed further.

In fact during the year BE 2517, three years after they were officially released to the public a number of these amulets were blessed again by Luang Poo Waen of Wat Doimaipang, who transferred sacred power into the amulets on January 9th-10th.

The Gold filings when present on the surface of the BE 2513 amulets often makes then very easy to identify. Note that some of these amulets were also sent to Wat Bowin.

Pra Pong Yanvilas amulets were made of several hundred auspicious / sacred components, and below I have listed the major inclusions.

gold powder collected from many sacred City Pillars throughout Thailand

All our amulets are guaranteed to be genuine. In the unlikely event that you consider this not to be the case, the amulet may be returned within the specified guarantee period of 6 months from date of purchase.

The amulet will be re-assessed with a competent organisation. If the claim is found to be genuine a full refund will be made. This may take anywhere between 1-2 weeks to complete.

Please note that if the amulet is genuine a charge will be levied for the costs involved for a second appraisal, typically about 75.00 US Dollars

Alternatively we welcome you to take the amulet for appraisal yourself to one of the following major authorities  G-Pra, G-Amulet, DD-Pra, U-Amulet or Samalom. We will respect any decision provided that you supply us with the original report and receipts.

IMPORTANT NOTE: We do not accept evidence of authenticity based on the comments of friends, other websites or competition entry disqualification.