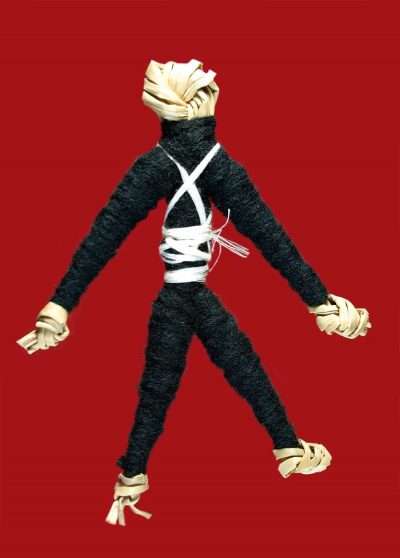 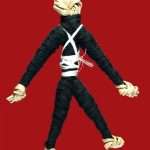 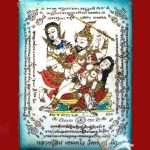 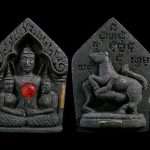 The Hoon Payont or Enlivened Effigy is a popular pim but relatively few people actually have a good understanding of this amulet or indeed realise that it is quite an old amulet and not a modern day pim as the name may suggest. (Today many people refer to these pims as robot amulets.) The sacred science to create Payont is highly specialized and based on archaic knowledge, A knowledge in fact based on the principles of the 4 or 5 cosmic elements, without which  it would not be possible to breathe life into the inanimate effigy

This particular example  is made from jungle grasses wrapped in black thread. Each of the thousand strands were blessed seperately before final incantations held in a graveyard during the night.  with a spell known as ‘katha mon nippan” or spell of enlightenment. The sacred kathas are  required to imbue the Payont with life-force or spiritual energy and thus giving what is essentially an inanimate object a consciousness and an intelligence of some kind.

This Payont is believed to be a potent spirit force that is able to depart and return to the idol to do your bidding.

It is common practice for payont to be used for protection and often employed for example by farmers to safeguard crops or for protection of  business premises. Another popular practice is to carry a payont in the car as a means to prevent accidents This Payont can either  be carried on the person, taken with you wherever you go as a means of personal protection or can be stationed in a single location with a specific task.

Most Hoon Payont are made according to an ancient scared science known as Vicha Pook Hun. The creation of Hoon Payont amulets is quite old and not a modern amulet as many believe. In fact there are records of this type of amulet being create several hundred years ago.

Although the historical records are somewhat vague one of the very earliest accounts was during the reign of King Ajatasatru, when a monk known as Pra Mahākāśyapa was asked to gather relics of Buddha from various locations returning them to Rajgir City in the Indian subcontinent.

The relics were then buried in a pit dug into the ground and guarded by Hoon Payont, or effigies made of grass and sappanwood, made potent by magic incantation.

In 319 B.C., during the reign of King Asokaraj, Intharapatta City,  these relics were  recovered from the ground to distribute to 84,000 cities. Legends tell us that Indra himself had to assist in the process, releasing the Hoon Payont back to the elements from which they were created, otherwise access to the relics would have not been possible.

Over the course of time much of the information about Enlivened Effigies has been lost. However there are a number of Thai historical accounts and in particular from the Tale of Khun Chang Khun Paen. “Nang Thongprasri had taken her son to study with Khrua Ta Khong of Wat Khae until her son completed Khrua Ta Khong’s knowledge in Hoon Payont. Then he performed magic incantation to summon groups of enlivened effigies,Thronging out of their home, acclaiming and hollering in great activity Khun Phaen rode a horse to attack and slaughter the front line.All the Hoon ran as fast as wind, instantly overtaking the horse on both sides.Spells and magic filled the sky so much it became dark and hazy and shivered.The earth was as if it was being turned upside down because of the magic prayers…”